We really liked the idea of Mark’s tweet about “Cream of Meat” cereal.  The tweet itself was very funny, but when we created it as a Hoppus Scene, it seemed to lack some punch.  We had Mark sitting at a table, about to enjoy some Cream of Meat.  Not exactly exciting visuals, though. 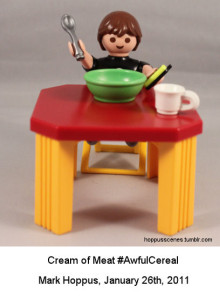 The image just sat on the shelf for a while, as more interesting and amusing Scenes bypassed it on the way to the actual posting floor. Finally, we decided to step it up a notch by going to the source of the cereal – the animals themselves! A more visually appealing image, as well as adding a bit of pathos to the whole thing. The axe was the final touch. Now it was post-worthy! 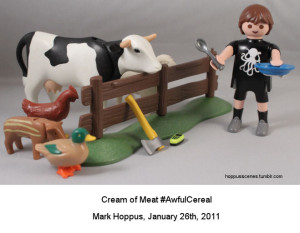 When Playmobil released a little Scottish figure this year, we were quite excited. He was brooding, with wild shaggy hair, sturdy boots, a green plaid and a broadsword. Perfect!

We went searching for mentions of Scotland by Mark. There weren’t too many, but we did manage to shoehorn the little figure into doing duty as a waiter in a scene about blood pudding. 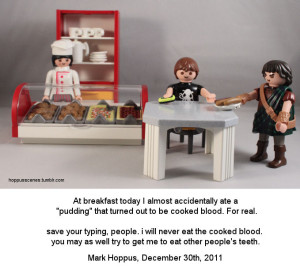 Then recently we came across a mention of the movie “Highlander”. Why we never thought to search for that term to begin with, I’m not sure!

We are big fans of the 1986 movie Highlander. We had it on VHS back in the day, and then Laserdisc and now DVD. We had multiple copies of it – North American cut, European cut, Director’s cut. We even had multiple versions of the monstrosity that is Highlander II, including a Japanese version and the recut Renegade version. We played the amazing Queen soundtrack over and over, and at one point had copies of all the different international promo posters up on our walls.

So we made a scene for Mark’s Highlander tweet. And the day it was going up, we noticed that the Highlander was holding the wrong sword! He had a sword, but in setting up the scene, he’d been given a random silver sword from our collection, and not the grand broadsword that the Scottish figure came with, and that Connor MacLeod of the Clan MacLeod used in the flashbacks to the highlands in the movie. 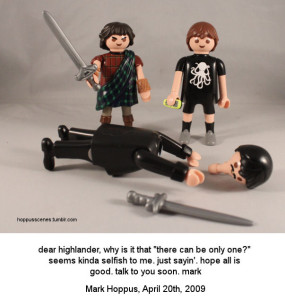 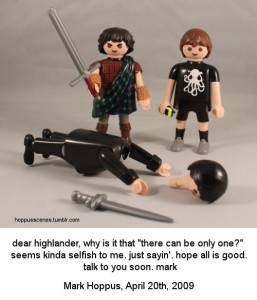 Would anyone have noticed this detail? Probably not. But our inner Highlander fan couldn’t let us use that one once we’d noticed the mistake, so the scene was recreated using the proper sword. 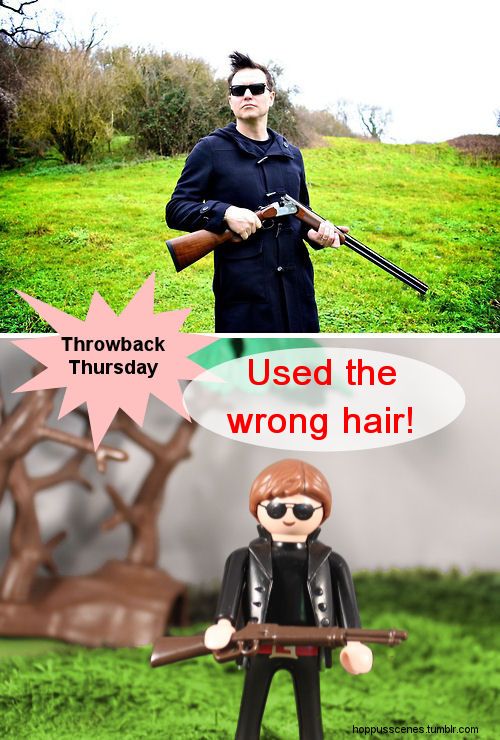 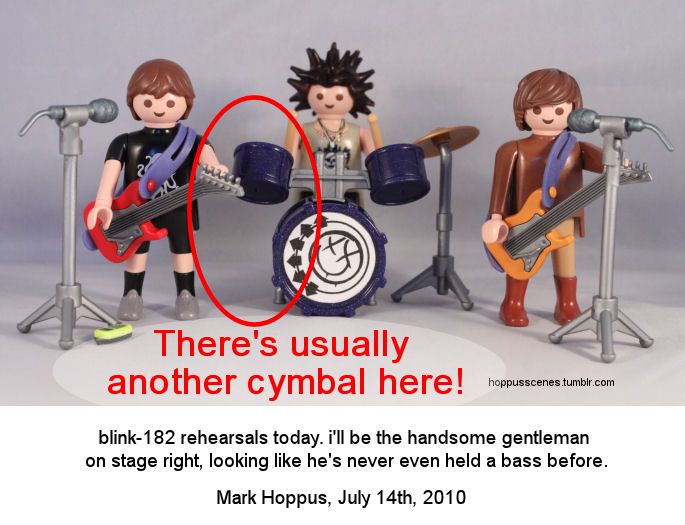 The first try at this scene included blue both on the bottom, and in the background. We thought it would work both as the water, and as the sky.  However, it turned out to be too dark. 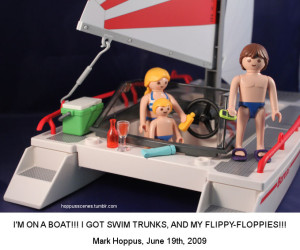 Blue for the water, and white for the background – this worked much better! 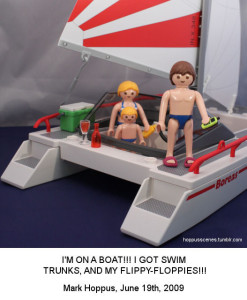 This was a neat little scene, which was fun to set up, but we decided that Mark needed to be a little more front and centre in the action… 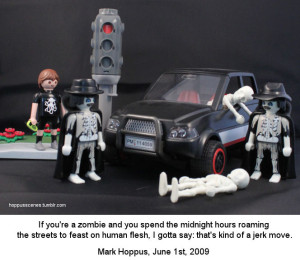 Better! Now Mark is right there in the thick of things. Fortunately, the zombies haven’t noticed him yet! 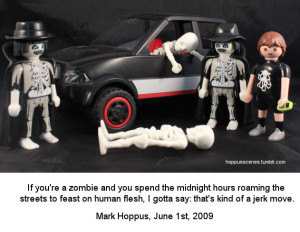 After setting up and photographing this scene, it was pointed out to us that the lumberjack wasn’t actually holding a chainsaw – he had a hedge trimmer in his hands!  We thought that it wouldn’t make that much difference, at first, but realized that it just wasn’t right. 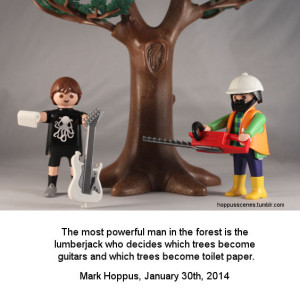 A short time later, we managed to get a hold of an actual chainsaw, and redid the scene. That’s going to make it a lot easier to cut down the tree! 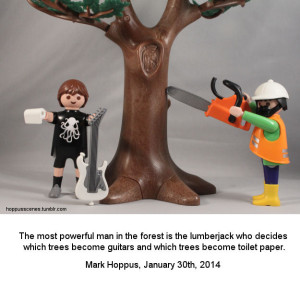 (You’ll also notice that the lumberjack is holding the saw higher, and up against the tree. The chainsaw is much heavier than the hedge trimmer, and he would have fallen down if he wasn’t leaning on the tree!)

Sometimes we get a scene set up, photographed, and put away again before we notice an error in the scene.  That was the case with this one – we realized that the harp was backwards! You can tell that we didn’t just flip the harp around – everyone is sitting in different spots, playing different instruments – it’s even a different harpist! 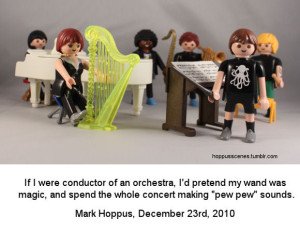 That’s not how you play a harp! 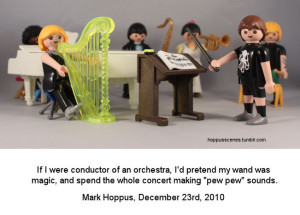 Being more used to the old standard, North American refrigerator, with the freezer compartment on top, we didn’t even think about what kind of refrigerator Playmobil would produce.

So we set it up with the smaller compartment on top.  Twice. 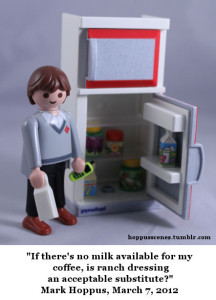 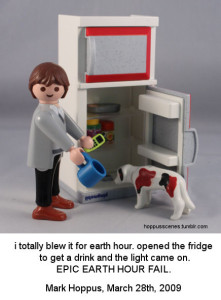 But that’s wrong – not only is the Playmobil logo visible – upside down – on the bottom, but the shelves are upside down on the door! Items are supposed to sit in the shelves!

The first version of this one was created early on – we didn’t have the octopus shirt yet.  After taking the photo, we realized that both characters looked very similar, and decided to hold off on posting it. 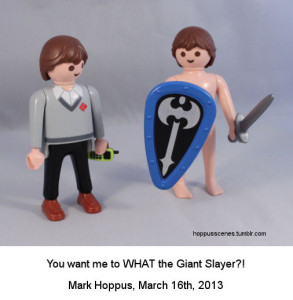 For the second version, we had made Mark’s octopus shirt, and decided to make the giant slayer more slayer-like.  However, we then saw the movie, and realized that at no point was Jack dressed like a knight. 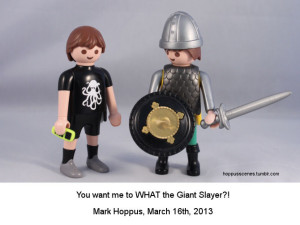 Finally, we returned to the earlier idea of Jack being a little underdressed – though with a helmet this time. The final *ahem* touch was subtly moving Mark’s hand to a more appropriate spot… This version was post-worthy! 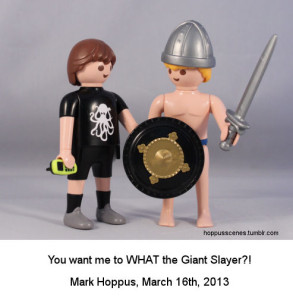